You Are Here: Research Topics 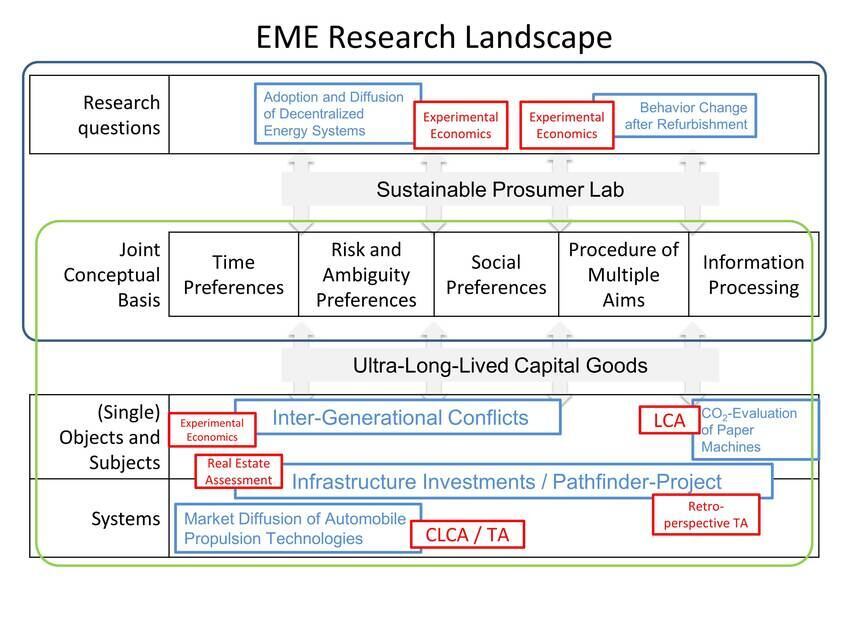 The “prosumer” focus addresses the increasing relevance of the consumer in the production process, increasingly more so nowadays, in the areas of energy and mobility (such as decentralized energy generation and storage by photovoltaic means). These areas have severe impacts on the environment, although, such impacts are – even today – not easy to quantify. The “ULLI“ focus addresses long-term investment decisions, such as in infrastructures for energy supply or for mobility. On the one hand, these involve considerable uncertainties (due to the long time horizon), and on the other hand they will impact on future generations who are not participating in today’s decision making. These emerging topics are gaining significance with regard to sustainable development and the underlying technological systems’ resilience to shocks. Furthermore, they reflect the changing needs and preferences of households (e.g “smart homes”) and, in turn, changes to the economy and its structure. Considering these societal trends, it can be assumed that not only will there be various new and interesting working fields opening up to graduates in the area of „Sustainability and Corporations“, but also new possibilities and opportunities for their future careers.

The impacts of many investments go far beyond the planned financial and non-financial consequences of the decision makers. On the one hand, decision makers fail to consider all the relevant social, environmental, and economic aspects. On the other hand, the investments often have effects that outrun the evaluation horizons of decision makers and their stakeholders. In this sense, we can differentiate between a planning horizon and an effect horizon. At the same time, this distinction is constitutive for ultra-long-lived capital goods.

EME investigates the economic and social relevance of ultra-long-lived capital goods. In this context, microeconomic calculations as well as macroeconomic and technological consequences are considered.

If the relevant effect horizon T2,e for a decision maker or T2,s for a stakeholder significantly exceeds the planning horizon T1 of the decision maker, which is or was relevant for the planning and carrying out of the investment, the investment can be considered to be ultra-long-lived. The effect horizon describes the time frame in which consequence of relevance for the decision maker or stakeholder occur. The planning horizon describes the time frame during which consequences are considered.

A central approach of EME includes the integration of the perspectives of investors, market participants, different stakeholder groups, and policy makers on ultra-long-lived capital goods and their different time dimensions. This enables not only the drawing of scientific conclusions, but also results in a more objective discussion of new technologies and technology paths.

The Prosumer is simultaneously a producer and consumer, and constitutes an active unit in the added value chain. Traditionally, the added value chain has always been the domain of the producer. The Prosumer, in contrast, softens the distinction between production and consuming, and creates more interactive solution approaches in either domain. The similarly familiar definition of the Prosumer as that of a professional consumer is not relevant in this specific field of research.

A phenomenon of the post-industrial age, the Prosumer is becoming a promising market player in several scientific disciplines. From an economic perspective, the consumer is once again becoming an integral part of the value chain (in the pre-industrialized age the Prosumer was the principal economic subject). For the Research Area EME, the definition of the Prosumer is also economically motivated, as the Prosumer consumes, produces, and stores energy, operates an energy network, transports electricity, and optimizes economic decisions regarding energy consumption.

In particular, recent developments in the field of “Web2.0” are creating new possibilities for several economic sectors to implement the concept of the Prosumer. With the focus on the energy sector, new perspectives and alternatives to existing market solutions, stakeholders, competitive structures, consumption behavior, and further relevant focuses of analysis are opening up. The concept of the Prosumer is creating entirely new possibilities and requirements for economic analysis. This is mainly due to the fact that the Prosumer is in the role of the universal decisions maker, who operates on the side of the producers as well as on the side of the consumers.

From an economic point of view, it is necessary to revise existing solution approaches and fit them more closely to the Prosumer’s actual decision. The analysis of this phenomenon entails the integration of diverse economic methodologies in order to achieve qualitative results.

Over the past two centuries humankind has been increasingly perturbing the Earth's system components. Examples of anthropogenic interventions into the Earth's system are the extensive exploitation of natural resources, the disturbance of terrestrial and marine ecosystems, and climate change caused e.g. by rapid changes in the carbon balance due to massive use of fossil fuels and land use change. Our future climate system entails many risks related to the loss of biodiversity, long-lasting consequences of global warming, and potentially cascading catastrophic events.

In addition, there is much uncertainty about future economic conditions, such as economic growth, population dynamics, resource and energy use, as well as the type, direction

and pace of technical change. Given these risks, decision makers must take into account the intrinsically uncertain nature of future states of the economy and the Earth system components when designing climate policy.

This is essentially a risk management problem. Within the research topic “Climate Risk Management” EME researchers are committed to apply original and insightful methods to help solving one of the most urgent and widely discussed contemporary issues of global policy concern.